This post will explain a bit about learning disabilities. It will also talk about self-advocacy and fighting discrimination.

Self-advocacy is the ability to speak up for yourself and the things that are important to you. For example your health, your work, your education………..

You can also have advocates who will help you and speak up on your behalf if you are being treated unfairly.

“The treatment of a person or a particular group of people differently, especially in a worse way from the way in which you treat other people, because of their skin colour, sex, sexuality, etc.:”

People with disabilities suffer direct and Indirect discrimination nearly every day. even with the Equality Act 2010 (On this link you can find an easy read version Equality Act)

END_OF_DOCUMENT_TOKEN_TO_BE_REPLACED

One of the goals of Disability Medway Network is to encourage people with disabilities to become an active member within their societies and to get the voice heard.

In February I got selected to stand as a candidate in the May 2nd local elections. The overall experience was really fun. I met some great people and talked about their concerns on the doorsteps I also had two fantastic running mates. The night of the count was long, tiring but exciting and the general atmosphere was really good.

To view, all of the Medway results click on the link Medway elects

Although this group is aimed at encouraging a wider involvement in society and politics I did not advertise my run on this group before the election as this would have been overtly party political. However, I feel it important, that our representatives should reflect the society around them and for this to come about, people of all ability should feel able to run for political office.

Medway has lots of brilliant community groups providing direct support for people with disabilities as well as tackling important issues like social isolation, hate crime and cuts in funding.  (Most of these groups are directly run by people affected)

Joseph Wastell the founder and organiser of Disability Medway Network

Disability Medway Network was first set up to act as a forum for people with disabilities, their friends, families and/or carers to discuss their experiences of disability in Medway After getting funding from involving Medway and Kent community foundation, I put on my first networking event which was attended by thirteen groups and charities.  After that, I decided to call the group Disability Medway Network. Now we are a signposting group and work with other groups and charities to, raise awareness of both hidden and physical disabilities, to campaign on stuff affecting disability and encourage people with disabilities to take a more active part in society.

Unfortunately there is very little awareness of dyspraxia. In this post I want to add some information about this disability. To read the article what inspired this post click on the link: The guardian

What is Dyspraxia.
Dyspraxia is also known as developmental co-ordination disorder. It also affects co-ordination skills and balance, that makes some tasks like learning to drive and other things requiring motor skills quite difficult. For more information, go to NHS choices Or visit the Dyspraxia association

Before and some time after world war one people with disability’s were treated awfully from the lunacy act 1845 to the idiots act 1846. There was so many other nasty little acts.

Throughout history people with disabilities have struggled for rights and better recognition In society and world-wide.

For more information go to.

From childhood Joe Wastell has had to overcome the odds, fighting illness that left him with learning difficulties and unable to walk, talk, read or write for a year.

But he’s gone from strength to strength since getting a job as a porter at our Chatham store three years ago, and he’s hugely popular with colleagues and customers.

Joe, who’s 24, goes above and beyond to help shoppers – and does lots of fantastic charity and community work, including setting up a disability support group.

His mum Pauline said: “He tried for all sorts of jobs and was absolutely delighted to get the job at Asda, and we were delighted for him. It’s helped his confidence and we’re incredibly proud of him. He’s got such heart and compassion – he’s got so much to give.”

Joe’s role at Asda is his first full time job and he says it’s boosted his confidence, as well as giving him the skills to help others.

He said: “This is the only job I’ve ever had, and I was definitely grateful to be given the chance by Asda. Everyone is really helpful and friendly, and the job has helped my confidence.

“The best parts of my job are meeting new people and helping customers.

“I recently started Disability Medway Network on Facebook. The aim is to give people with disabilities a bigger voice within society. We recently held our first meet and greet event where people could talk about their experiences with disabilities, and also meet organisations who can offer support.

“I’ve also been involved in all sorts of charity and community projects. In January, I spent a night on the streets as part of ‘the big sleep out’ to raise money for Porchlight, a local homeless charity. I’m studying an Open University course in social sciences, and I’m hoping to do a counselling course in the future too.”

Joe contracted chicken pox when he was five, leading to a rare complication – a brain inflammation called encephalitis.

Pauline said: “He lost everything – his speech, his memory, the ability to walk. He’s always been a really bright lad, and he gradually learned to walk, read and write again, although he was left with a deficit in his learning.

“He loves his job. He enjoys helping people put their shopping in the boot, especially if they’re elderly, and is really popular with everyone.

“We’re incredibly proud of him. He’s had a lot go on in his life with his health, but he’s never complained once.

“Joe has always been so determined to work. He’s really making an impact in the community, encouraging other people in all sorts of ways.”

Caroline Miles, who’s a service host for self scan at the store, said: “Joe is a fantastic, outstanding colleague who goes above and beyond and will help anyone with anything.

“He goes out into the community a lot through his support groups, setting up meetings and functions. He’s a star.”

The store’s community champion Leonie Samways said: “Joe always has a smile and a helpful attitude to make our customers’ experience that little bit better.

“He does so much out in the community – he’s involved with the Scout movement, he’s walked Hadrian’s Wall and helped to lead an expedition to the Three Peaks, as well as raising money for a homeless charity.

“Joe’s one of our hidden aces and everyone here at Asda Chatham is extremely proud of him.”

To find a group in Disability Medway’s Network, please follow the link

The young founder of what is thought to be Medway’s only online disability network. says he is delighted at the success of the group’s first off-line event, which took place recently at St. Justus Church in Rochester.

Twenty-four-year old Joseph Wastell, who himself has a disability. Set up the Disability Medway Network on Facebook only a year ago. The aim is to encourage people with disabilities in the region to take a more active part in society, by providing a central place for them to find the support they need. He initiated the group following his own experience of finding it difficult to access information.

thirteen groups and charities took part in the event, which was hosted at St. Justus Church – of which Joseph is a member. The aim was to allow people and carers of those with disabilities the opportunity to meet groups and charities from across Medway in person; it also allowed organisations to network with each other too, with some meeting for the first time.

Joseph, who is committed to getting the voice of disabled people heard, said that everyone should have the chance to lead a fulfilling life:

“I believe that the way to improving people’s life chances is to build up their confidence. Many disabled people are missing out, simply because it can be so hard to find out what groups are out there to support them.”

He added: “By bringing information about all the different disability needs groups together in one online place, and by running events like this fayre, I hope that disabled people will find it easier to access the help they need, and that this in turn will allow them to take a more active part in society.”

The event was funded by Involving Medway, an initiative run by Medway Clinical Commissioning Group, designed to encourage people to get involved with and help make decisions about health provision in the area. It aims to help residents lead healthier, happier lives through improved participation in community groups and activities. Rosie Anderson, Project Manager for Involving Medway, said that she had initially been unware that a group like this didn’t already exist:

“I was very surprised. An event like this is therefore so vital, as it brings together the community in Medway who have identified that they have a disability and would like to share information and support each other. This can only be beneficial to improving their health and life outcomes.”

“As a church family we would always seek to be a welcoming and supportive place for people with disabilities, but just as with wider society, we know there is always more we can do. I am therefore really grateful that we have Joseph to help us learn and challenge us on what we do.

“I’m thrilled to see such a wonderful turn out and can only congratulate him on his commitment to making it happen.”

(Article from the Diocese or Rochester about the event) 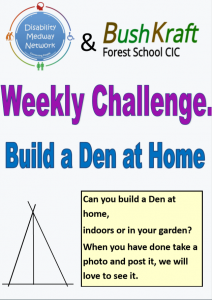